skip to main | skip to sidebar

Everyone has a different one, but I'll share mine with you. If I tried to sit in a room and stare at the wall and come up with an idea, nothing would ever come to me. I know because someone told me that was their creative process, and I tried it. Nothing. My mind was completely blank. I personally need to get the ball rolling. If I get a new scene, I just start drawing anything. If I want to draw a comic about a gangster or a spaceman, I just draw them. I need to get the ball rolling. Anything that comes to mind no matter how random. Now I have a character, and an environment to explore. I can look at the drawing and say. Hey, where is he walking, what is he looking at. You can't come up with an idea before you come up with an idea. If that makes any sense. You just go. Again, no thinking. Just explore. See if you get lead down a road. Once you have a couple of key ideas that you like, then you can move on to outlining or thumbnailing or whatever it is you want to do next.

I was talking to one of the writers at work about this and he said he did the same thing. He would actually type, "I am typing right now at my computer, and the door is over there, there's a bird outside my window..." and so on, just so he was moving forward and going somewhere. You basically have to get that ball rolling some how. Once you get that ball rolling, then the ideas come flooding. that's when you jump out of bed at 2 in the morning and right stuff down to use the next day. Then the ideas start playing out in your head.

If you ever have to storyboard a scene, just draw random shots of the location and characters. You may use them, you may not, but it really helps to get started.
Posted by rad sechrist at 11:44 AM 15 comments:

Edit: In a side note, the purpose of the 180 rule is to "not confuse the audience so they can focus on the story." this means, you can break the rule as long as people don't get confused. Unless of course you want to confuse them on purpose.

As some of you know, I actually studied mechanical engineering in school. It's part of the reason why I break everything down into steps. There is one thing I learned in engineering. Never think. I don't like to waste precious brain activity on thinking. For instance, if I get a math problem, I don't make any assumptions, I just start it and go step by step and let the problem lead me to the answer. I can almost completely shut off my brain. This applies to everything I do. Here for example is how I handle the 180 rule. I don't think about anything. I don't even take a guess where the characters will be. I just hold my finger up and say, "this guy's on this side, this guys on this side." then I flip back and forth and make sure they are on the same sides.

Here is the thumbnail. I don't worry about "drawing". I just scribble and figure out the panel layout.

Next I start to clean it up a little and figure out the drawing. I was having a really bad drawing day this day for some reason. sometimes I can go straight from the thumbnail to cleanup without even thinking. I almost wonder how I did it. But, then, some days I just can't for the life of me draw. It usually happens when I don't do any warm up studies. I don't think I did any before this page. Bad idea.

Here are some better clean ups. Like I mentioned before, sometimes I switch brushes, or change the background, or do anything just to trick myself into thinking something is different. Then, I start to color stuff that looks like fun.

and here is what a final page looks like. gotta get back to work. This comic is way past due!

I've noticed a lot of people coming from a link on Drawn! Thanks Drawn!
Posted by rad sechrist at 9:51 PM 8 comments:

so, Xav and I correspond through the internet, and we often exchange tips. Notes from people are like gold. this was so good I thought I had to share it with you guys. The fastest way to improve is to get notes from people who are better. I've found that there is no such thing as a good drawing. You can always find someone that can show you something to fix.

anatomy of a cleanup

So, here is the latest panel I'm working on for the comic.

These DWD model sheets were done by the great Toby Shelton, currently a storyboard artist on the movie I'm on. He is one of the best draftsmen at the studio. He really should start his own blog. (wink wink.) These are some of the best examples of construction I have ever seen. 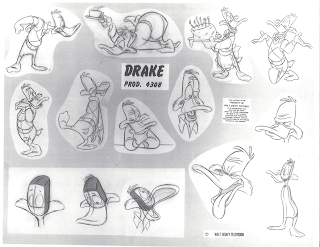 Here is an example of good "big shape" design.

In character design you really want to make strong big shape choices. I'm fairly new to character design and it's a lot to juggle, so I don't make the strongest big shape choices yet. I will try to strengthen these shapes as I move forward. Many artist start with small black silhouette drawings of just the big shape and then design the rest later. This only works if you are really confident in your drawing skills, and I'm still figuring out how to draw the thing in the first place. As time goes on, I will slowly transition my thinking to purely big shape design.(because hopefully I won't have to think about the parts)
Posted by rad sechrist at 11:23 AM 7 comments:

getting a new view

So, I don't have time to do any demos, as my comic deadline is looming. So I figured I'd just post my work as I do it. It makes my life much easier to completely figure out a design (straight on, profile, and color) before I start drawing the pages. This is pretty final, next I'll do the girl and the snake. Now I can refer to my model sheet. I try to keep the same basic construction and proportion for the comic, but hopefully push the shapes around for poses. I don't slide the model sheet under for the final page (mainly because I feel like it would be cheating), but I know many great artist who do (especially in animation).

What I do when I have to storyboard a character

I don't draw nearly as well as whoever drew this image, so much apologies to the artist, but this is what I would do if this character design showed up on my desk and I had to storyboard it. Most people I've talked to in animation feel like they never really learn to draw the character until the show is about over. If you like drawing characters with lots of anatomy, I highly recommend Charles Hu's figure drawing classes. (can you tell which one is me drawing the guy at the top of the page?)

front and back for cartoon anatomy

The movie I'm on has really big buff superheroes in it. I have to draw the anatomy quickly to get through the poses, so I have to simplify it a lot. Here is what I do.

A tutorial by Xav

So Xav was nice enough to make this tutorial for me a while ago when I asked him how he drew eyes. I have it up on my wall at work and I always refer to it. It is extremely helpful. I asked him if I could post it here and he said yes, so enjoy.

I'm surprised I've never done a post on this. this is the reason I'm able to draw storyboards so fast. I never even go back and figure out the joints, I just go straight to shading it.
Posted by rad sechrist at 4:04 PM 8 comments: 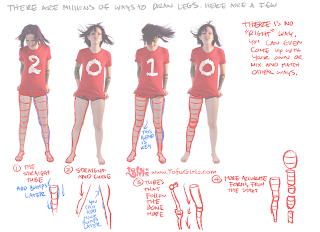 A quick note on eyes

These aren't completely accurate, but they work for doing hands quickly.

I draw differently for storyboards than for other things. I don't do a rough and then a clean up. I do a clean rough. These boards below are how I would draw the character designs on my other blog. Cat woman, and big girl. Now, I didn't try too hard to make the movement smooth on these, normally I would flip through them over and over to get it just right. I have to get though about 100 or so drawings a day, so I don't have time to do roughs and then cleanups. It's a fun way of drawing. 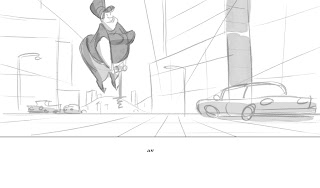 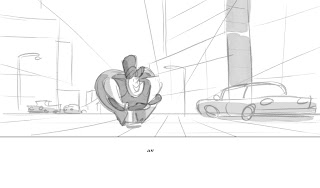 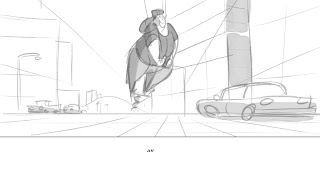 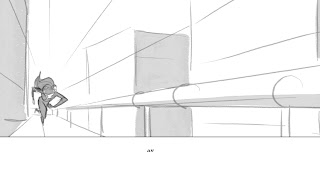 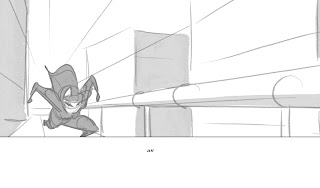 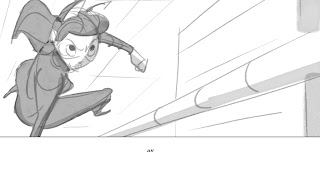 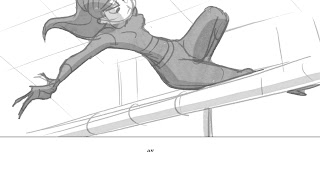 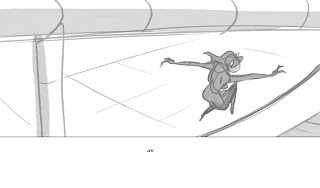 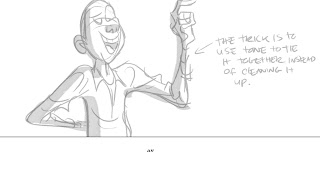